When U.S. Congressman Lucian Anderson from Kentucky voted for the 13th Amendment to the Constitution in January 1865, abolishing slavery, he gambled more than his political career. Anderson was from Mayfield, one of the most rabidly secessionist towns in the Bluegrass State. During the Civil War, his political alignment changed from pro-slavery Union Democrat to Unconditional Unionist to Republican. Elected by Unionists in 1863, he soon received death threats and was kidnapped by Confederate raiders who held him for ransom (while he tried to convert them to the Union cause).
He was a Kentucky delegate to the 1864 national convention that re-nominated President Abraham Lincoln. Knowing he could not win another term, Anderson did not seek reelection in 1865. Based on newspaper articles, letters and other contemporary sources, this book provides a detailed portrait of an overlooked but significant figure of the Civil War and Kentucky history.

Berry Craig is a professor emeritus of history at West Kentucky Community and Technical College. He lives in Mayfield, Kentucky.
Dieter C. Ullrich is head of special collections and archives at Morehead State University. He has done extensive research on the Civil War in the Jackson Purchase region of Kentucky and Tennessee and has authored articles that have been published in the Filson History Quarterly and other scholarly journals. He lives in Morehead, Kentucky.

2. Stepping to a Different Drummer 17

“valuable…sheds light on an unheralded and largely unappreciated man of principle who was ahead of his time.”—Civil War News. 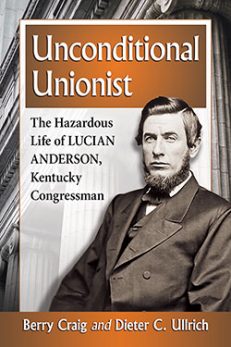