In the 21st century, typhoid fever afflicts more than 21 million people each year, primarily in underdeveloped countries. In the age before sanitation and antibiotics, the infection was even more devastating, crippling entire armies and claiming the lives of both rich and poor. The story of typhoid is in many ways the story of modern medicine itself, with early efforts at treatment and prevention paving the way for our understanding of infectious disease in general. Many sought to understand and control the disease, including Robert Koch and Walter Reed. There were unsung heroes as well: Pierre Louis and William Gerhard, among the first to identify the disease’s unique nature; William Budd, whose studies demonstrated its transmission through feces; and Georges Widal, whose test for the disease continues to be used in some areas. This book chronicles the fight against typhoid in the words of these and other medical pioneers, showing how far we have come and how far we have yet to go.

Elise Mara is currently a graduate student studying epidemiology at the University of Michigan School of Public Health. She lives in Livonia, Michigan.

Acknowledgments vi
Preface 1
1. Earliest Historical Descriptions 11
2. The Plague of Athens 19
3. The Strange Death of Alexander the Great 25
4. The Etiological Agent and Pathology 34
5. Scientific Progress in the 18th and 19th Centuries 44
6. Of Princes and Presidents 69
7. Identifying the Etiological Agent 93
8. Widal Versus Grünbaum: A Question of Priority 110
9. Typhoid Carriers: The Story of “Typhoid Mary” 131
10. Vaccination as a Preventive Measure: The Work of Sir Almroth Wright and Beyond 148
11. Typhoid in the American Army 176
12. Typhoid Fever in the 21st Century 191
Chapter Notes 197
Bibliography 211
Index 217 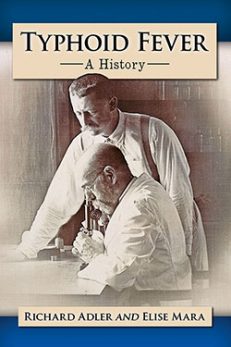