Memoirs of Life in Vietnam Through Japanese Occupation, the French and American Wars, and Communist Rule, 1940–1986

The author was born in 1940 and spent his childhood in two small villages, the paternal and the maternal, in southern Vietnam: Binh Chuan and Tuy An (An Phu). The villages were deeply affected by the powerful political events of the next fifty years. In this memoir (first sentence: “I was born as the Japanese Troops were invading northern Vietnam”), the author writes of what he saw, heard and knew, providing an invaluable social history of the country. Readers will learn about a people who have endured separation, dictatorship, carnage, persistent suffering and poverty, all the while yearning for independence and prosperity. Included are many stories—some funny, some heartbreaking—that reveal how the Vietnamese people lived, as well as their thoughts on war, on the French, Japanese and Americans, on the Nationalist and Communist governments, and on escape. The result is a heartfelt “social painting” of the nation.

David Lan Pham was born in Thudaumot, South Vietnam, and left the country clandestinely with his son and two brothers in 1986. He worked for the refugee program in Alabama and created the bilingual Bulletin/Tin Viet and Dac San Que Huong. He lives in Toledo, Ohio.

“a memoir of a life in two small villages in southern Vietnam”—Reference & Research Book News. 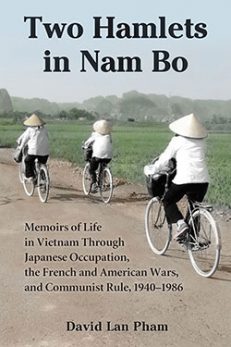