Most horror film fans are familiar with the movie classics, from the early Universal archetypes to the Hammer landmarks—all of which have been celebrated in countless books and magazines. But what about the parallel universe of television horror? The series, made-for-TV-movies and specials?
With detailed coverage of shows from Britain, America and Europe, this book chronicles the small-screen appearances of Dracula and Frankenstein’s monster, adaptations of stories by Edgar Allan Poe and M.R. James, performances of beloved stars like Boris Karloff and Vincent Price, groundbreaking series like The Television Ghost, Lights Out and Dark Shadows, and such memorable movies as The Night Stalker, The Norliss Tapes and Salem’s Lot, along with unearthed gems like The Ghost of Sierra de Cobre and Mrs. Amworth. The work of such key directors as Dan Curtis and Lawrence Gordon Clark is also examined.

Howard Maxford is a freelance entertainment journalist who has contributed reviews, interviews, features and retrospectives to a variety of UK magazines, including Film Review, Starburst, Shivers, Replay, Tower Records’ Top, London After Dark, Video Now and HMV Choice. He lives in South London. 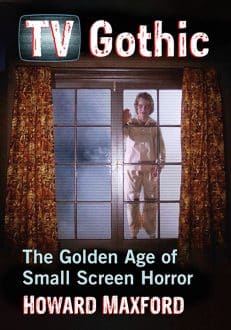