Wade Hampton, Philip Sheridan and the Largest All-Cavalry Battle of the Civil War

In June 1864, General Ulysses Grant ordered his cavalry commander, Philip Sheridan, to conduct a raid to destroy the Virginia Central Railroad between Charlottesville and Richmond. Sheridan fell short of his objective when he was defeated by General Wade Hampton’s cavalry in a two-day battle at Trevilian Station.
The first day’s fighting saw dismounted Yankees and Rebels engaged at close range in dense forest. By day’s end, Hampton had withdrawn to the west. Advancing the next morning, Sheridan found Hampton dug in behind hastily built fortifications and launched seven dismounted assaults, each repulsed with heavy casualties. As darkness fell, the Confederates counterattacked, driving the Union forces from the field.
Sheridan began his withdrawal that night, an ordeal for his men, the Union wounded and Confederate prisoners brought off the field and the hundreds of starved and exhausted horses that marked his retreat, killed to prevent their falling into Confederate hands.

1. “I had rather die than be whipped”: The Battle at Yellow Tavern and the Death of J.E.B. Stuart 7

2. “Proper commanders. Where can they be obtained?”: Lee Defers Selecting a Cavalry Commander 18

3. “Strike fast and strong”: Evolution of the Cavalry Corps, Army of Northern Virginia 26

4. “When am I to get another horse?”: Confederate Cavalry Regiments—New Commanders, Old Problems 32

6. “The Very Man I want”: Philip Sheridan and His Senior Commanders 63

8. “I will not fight under the orders of a Dutchman”: Changes in Composition of the Union Cavalry Corps 94

11. “An exceedingly messed up affair”: The Battle Opens on the Fredericksburg Road 122

15. “Roll them up like a ribbon”: Sheridan Prevails at Trevilian Station 159

16. “Too horrible to dwell upon”: The Night of an Unfinished Battle 169

19. “The most disorderly retreat I have seen”: Union Defeat at Samaria Church 200

20. “I regret my inability”: Assessing the Outcome of the Trevilian’s Battle and Raid 212

21. Old Soldiers Fade Away: Lives After the Battle 223

Appendix A. Order of Battle and Casualties 259 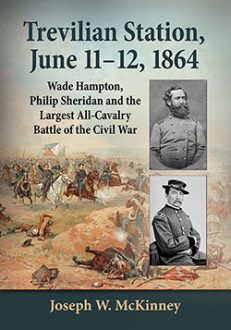