For nearly two decades Alan Trammell displayed an all-around game as a fielder, hitter, and base runner that was rare for shortstops of his era. With second baseman Lou Whitaker, he formed one-half of arguably the greatest double-play combination in baseball history and was an integral piece of one of the signature teams of the 1980’s. Trammell was a World Series hero and a central figure in one of the greatest pennant races in American League history.
From his early days as a multi-sport prep star in the talent-rich San Diego area, through a meteoric ascension up the minor league ladder and into the big leagues, Trammell won over doubters and overcame setbacks to become one of the top players in the Detroit Tigers’ history. He joined Ty Cobb and Al Kaline as the only players to spend 20 seasons in Detroit, and later served an ill-fated managerial stint with the franchise. This exhaustively researched biography provides the first book-length account of the life and career of one of the most well-known figures in Detroit sports history.

SABR member Todd Masters has followed the Detroit Tigers for more than 40 years. He lives in Grand Rapids, Michigan. 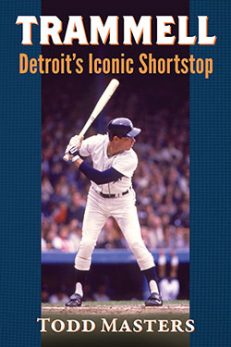