In the summer of 1930, two federal prohibition agents were murdered. The first died in a hail of buckshot on a dark street in Aguilar, Colorado. Six weeks later, the second agent and his vehicle disappeared on a sunny afternoon along a New Mexico state highway south of Raton. During their fifty-year search, the authors sought answers to why no one was ever prosecuted for these crimes. This is the first book to correlate the two murders, identify how and why they occurred, and name the parties involved and the roles they played.
Drawing from first-hand interviews and National Archives files, this book lifts the shadows along the trail as the light of truth is shown upon this mystery. Two federal agents can now rest in peace. 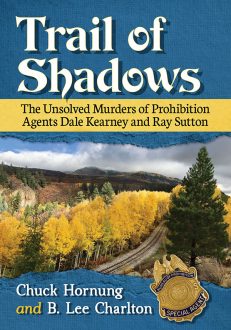