Drawing on dramatic accounts by European colonials, and on detailed studies by folklorists and anthropologists, this work explores intriguing age-old Asian beliefs and claims that man-eating tigers and “little tigers,” or leopards alike, were in various ways supernatural. It is a serious work based on extensive research, written in a lively style.
Fundamental to the book is the evocation of a long-vanished world. When a man-eater struck in colonial times, people typically said it was a demon sent by a deity, or even the deity itself in animal form, punishing transgressors and being guided by its victims’ angry spirits. Colonials typically dismissed this as superstitious nonsense but given traditional ideas about the close links between people, tigers and the spirit world, it is quite understandable. Other man-eaters were said to be shapeshifting black magicians. The result is a rich fund of tales from India and the Malay world in particular, and while some people undoubtedly believed them, others took advantage of man-eaters to persecute minorities as the supposed true culprits. The book explores the prejudices behind these witch-hunts, and also considers Asian weretiger and wereleopard lore in a wider context, finding common features with the more familiar werewolves of medieval Europe in particular.

Acknowledgments vi
Preface 1
Introduction: The World of the Weretiger 3
1  A Colonial Menace: Jungle-Wallahs and Man-Eaters 9
2  People and Tigers: Together in Life and Death 27
3  Killers and Killed: Propitiation and Appeasement 55
4  Fighting Back: Jungle-Wallahs to the Rescue 76
5  Shapeshifters All: Like Weretiger, Like Werewolf 93
6  Tigermen in Malaya: Negritos and Jambi Men Accused 113
7  Beast People: Weretigers and Wereleopards in India 135
8  Beast Master: The White Sadhu and the Ultimate Terror 167
Chapter Notes 185
References 195
Glossary 200
Index 201

“A great read…a thorough scholarly apparatus underpinning every narrative opportunity…skillfully manages sensationalism while setting a cracking pace…fascinating as a tiger’s stare, well written and packed with all the detail…that you could possibly want”—Fortean Times; “highly readable volume”—Fabula; “I know of no other book that has taken a serious look at the man-eaters as they were viewed by the people being eaten, as opposed to the people hunting them…a major addition to the literature on the subject…in fact, an oasis in a desert of sensationalist nonsense. Newman has gathered material from diverse sources and put a book in an empty space that was just waiting for something of this sort…an important book”—Paul T. Barber, Fowler Museum of Cultural History, UCLA. 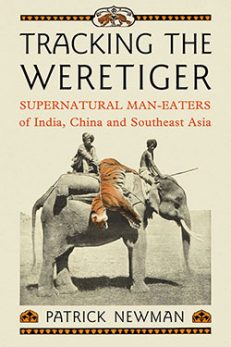 You're viewing: Tracking the Weretiger $25.00
Add to cart