Too Many Men on the Ice

Entering the 1978–1979 season, the Boston Bruins had been one of the best teams in the National Hockey League for more than a decade. Yet they could not shake the postseason jinx the Montreal Canadiens held over them—the Habs had ousted them in 13 consecutive playoff series going back to 1940s. The Bruins wanted one more shot at their nemeses, after coming up short in both the 1977 and 1978 Stanley Cup finals. They got their chance in the semifinal round. Led by the colorful but embattled coach Don Cherry, the underdog Bruins played seven heart-stopping games. Victory seemed within their grasp but was snatched away with an untimely penalty in the final minutes of game seven. The author looks back at the season from opening night at Boston Garden to the catastrophic conclusion at the Montreal Forum, with detailed accounts of the semifinal games and a post-mortem of the infamous bench penalty.

John G. Robertson is a private tutor and sports historian who lives in Cambridge, Ontario. He is the author of numerous books on baseball, hockey and boxing history.

Review Fix chats with Too Many Men on the Ice author John G. Robertson to find out what inspired the book and why it’s a great look into one of hockey’s most storied rivalries.

Review Fix: How did this project start?

John G. Robertson: I had written a few baseball history books before I attempted to write this book.  I’ve always had the idea for this book in the back of my head because the Boston Bruins of the late 1970s were a fun bunch to follow.  They were the ultimate team.  Every player worked well as part of a unit.  They had all the ingredients of a Stanley Cup winner.

Robertson: I’ve been a Boston Bruins fan since the age of three.  The 1978-79 season has stuck with me because the Bruins were so close to winning it all and it suddenly unraveled.  The way the season came to an end was truly heartbreaking for me.  On some level, I’ve never really gotten over it.

Review Fix: Do you think Don Cherry deserved to be fired following the season?

Robertson: Cherry didn’t really get fired.  He chose not to accept the contract offer the Bruins presented him for 1979-80.  The Bruins were a stingy outfit in those days.  The difference in salary was only about $20,000.  Cherry got far more money by signing with the woebegone Colorado Rockies.

Review Fix: What did you learn about the team you didn’t expect?

Robertson: I learned plenty!  For example, I had forgotten about how injury-plagued the team was all season.  I learned that Gilles Gilbert was basically a forgotten goalie until he came through for the team in the playoffs.

Review Fix: Any cool moments during the writing process?

Robertson: Just about every time I read through the archival materials from the Boston Globe I was struck by the quality of the paper’s beat writers who covered hockey.  To me, the Globe’s staff did a better job covering the sport than Canadian journalists!  I also irrationally found myself becoming emotional watching Game #7 for the first time in nearly 40 years.  Somehow I hoped the outcome would change.

Robertson: Every hockey fan should enjoy it; but specifically fans of the 1970s Boston Bruins—followed closely by fans of the Montreal Canadiens.  I’ve received plenty of positive feedback from Bruin fans who said, “I didn’t know if I wanted to read this book because it would mean reliving an infamous defeat, but I’m certainly glad I did buy the book because it was a great story.”

Review Fix: How would you like this book to be remembered?

Robertson: I’d like this book to be remembered as a fair, accurate and entertaining narrative of the Bruins and their intense rivalry with the Montreal Canadiens—culminating in the 1979 semifinals.  It remains the most talked about playoffs series in the teams’ respective histories.

Robertson: I am putting the finishing touches on the manuscript to another hockey book:  This one is about the whole 1969-70 NHL season.  It was a wild, fun, and crazy campaign throughout—especially the final Sunday of the regular season.  It’s scheduled to be published in 2020.  Bruin fans will like how it ends!

Review Fix: Anything else to add?

Robertson: Besides being a good history of the Bruins of the late 1970s, this book is also a good story.  I think I did a good job in capturing the drama and heartbreak of the season.  Please check it out! 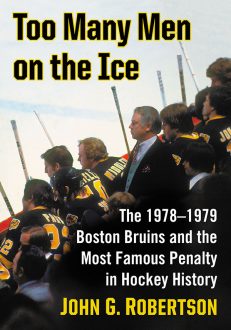