One of the greatest pitchers of the 19th century, Tim Keefe (1857–1933) was an ardent believer in the artisan work ethic that was becoming outmoded in burgeoning industrial America. A master craftsman, he compiled 342 career victories during his 14-season Major League career while adapting to numerous changes in pitching rules during the 1880s. Known as a strategic pitcher, he outsmarted batters, particularly with his change-of-pace pitch. He led the New York Giants to the National League pennant in 1888 and 1889, establishing a Major League record with 19 consecutive pitching victories in 1888.
He taught pitching as a college baseball coach, wrote several articles about his craft and established a sporting goods firm where he manufactured a baseball of his own design. He was a proponent for players’ rights as the secretary of the Brotherhood of Professional Base Ball Players, which formed the ill-fated Players’ League in 1890. This first-ever biography of Keefe covers the career of the 1964 Baseball Hall of Fame inductee.

Charlie Bevis is a member of the Society for American Baseball Research and adjunct professor of English at Rivier University. He has written for Nine, The Cooperstown Symposium, The National Pastime and Base Ball, and is the author of several baseball books. He lives in Chelmsford, Massachusetts.

“Extensively researched…well written…Bevis is to be commended”—Nine
“Another worthy addition to the literature of the experiment that was the Players League”—Nineteenth Century Notes. 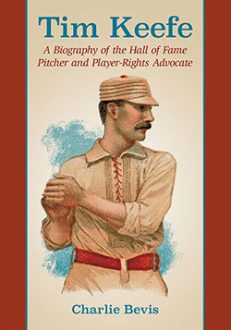