Identity, Survival and the Corporate World in African American Literature

In Bebe Moore Campbell’s Brothers and Sisters, Humphrey Boone is offered a seemingly wonderful deal by his job interviewer: “If you accept my offer and do the job that I believe you’re capable of, I’ll groom you for the presidency.” But for a black man, the generous offer involves such factors as being self-effacing, conforming one’s speech to “clipped enunciation and perfect diction,” and above all stifling any attraction to a white woman.
This study examines the works of such writers as Ralph Ellison, Gloria Naylor, Brent Wade, Ishmael Reed, Jill Nelson, and Bebe Moore Campbell in which blacks who work in predominantly white corporations pay a terrible emotional and moral price. Wade and Nelson conclude that such situations have caused many blacks to go quietly insane. Reed draws a rather frightening connection between the corporate and the academic worlds, explaining how the former has come to serve as a model for the latter in recent years. In Ellison’s Invisible Man, the young narrator learns of the extent to which Northern corporations control the activities of a Southern black college, and understands that he is invisible “because people refuse to see me.”

James Robert Saunders is a professor of English at Purdue University in West Lafayette, Indiana.

“A sobering study…his topic is vital, his readings are sound”—MultiCultural Review; “examines the challenges faced by blacks working in predominantly white corporations, through the perspective of African American writers who have chronicled the struggle”—Reference & Research Book News. 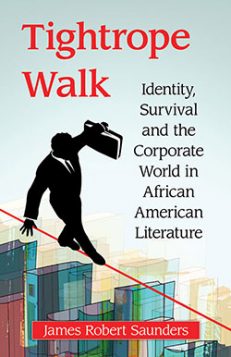