“This Terrible Struggle for Life”

The Civil War Letters of a Union Regimental Surgeon

This book offers a rare insight into the history of the Civil War in the western theatre through the eyes of a regimental surgeon. The newly graduated Dr. Thomas S. Hawley served in one of the premier fighting regiments of the Union Army. This collection of letters is important for two reasons: They detail his four and a half year career in the army through firsthand accounts of the various campaigns and his numerous duties, and they chronicle his interactions with captured Confederate soldiers, his encounters with pro–Southern and pro–Northern civilians in areas occupied by the Union Army, his experiences with freed slaves and numerous other daily events in the war. Notable among the letters is his record of the early Civil War in Missouri, the Vicksburg Campaign, the Battle of Tupelo and the Battle of Nashville. 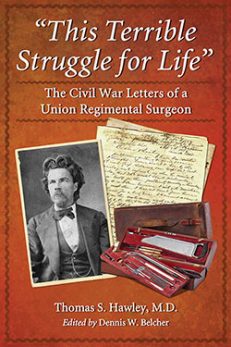 You're viewing: “This Terrible Struggle for Life” $45.00
Add to cart