The Two Battles and the Confederate and Union Occupations

This Civil War history focuses on Prince William County, Virginia, where two of the war’s greatest engagements were fought, thirteen months apart. The First and Second Battles of Manassas are described in profound detail but so are the lives of resident families as a cloud of despair hangs over their lands.
The book captures the experiences of leaders and privates, the good and the bad, while revealing horrific accounts of civilian victims, largely undisclosed until the writing of this book.

Don Johnson retired as a mission manager with the NASA Space Program and spent 14 years as a park ranger/historian at several Civil War battlefields. He has written numerous professional papers and newspaper and magazine articles. He lives in Crozet, Virginia. 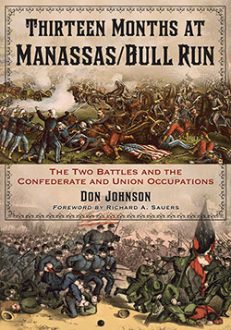 You're viewing: Thirteen Months at Manassas/Bull Run $35.00
Add to cart