A North Carolina General in the Civil War

The son of a North Carolina governor, Theophilus Hunter Holmes graduated from the United States Military Academy in 1829 and served on the frontier during the Trail of Tears. He fought in the Second Seminole War and in the U.S.–Mexican War. In 1859, he became the U.S. Army’s chief recruiting officer and was assigned to Governors Island at New York City. Only days before resigning from the U.S. Army, he helped organize the naval expedition sent to relieve Fort Sumter from the Confederacy’s blockade. But then casting his lot with his native state, Holmes led a Confederate brigade at First Manassas and a division during the Peninsular Campaign, commanded armies in the Trans-Mississippi, and organized North Carolina’s young boys and old men into the Confederate Reserves. Holmes served with some of America’s most notable historic figures: Zachary Taylor, Winfield Scott, Robert E. Lee, and Jefferson Davis. In modern times, however, he is virtually unknown. The man and the soldier possessed traits of both triumph and tragedy, as demonstrated in this biography.

The late Walter C. Hilderman III was a retired Charlotte, North Carolina, police captain. He was an American Civil War reenactor and historian for fifty years and lived in Eutawville, South Carolina. 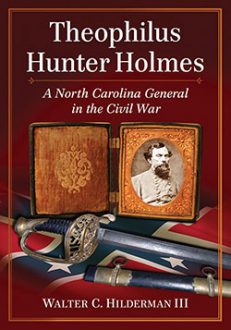