The German invasion of Poland in September 1939 abruptly ended author Jan Rosinski’s student life, and propelled him into an activist role in the Polish resistance organization Armia Krajowa. In short order he became a talented forger of Nazi documents, especially travel papers that allowed many refugees to escape the city. His university studies in chemistry and physics created a role for him as an effective saboteur. Narrowly escaping death on several occasions, he was fearless in his pursuits.
His dislike of the Nazi leadership was exceeded by an even greater hatred of the Soviet Army as it invaded Poland from the East less than a month later. Poland would be sealed off from the West for fifty years. Rosinski’s travails as a POW in Germany eventually led him to the Allied forces in Germany; the U.S. became the beneficiary of his brilliant discoveries in atmospheric science. Jan was accompanied on his life’s journey by his wife Barbara (d. 1993), who served as a medical officer in the underground army; Jan died in 2012.

The late Jan Rosinski authored numerous studies and research articles in atmospheric science. He lived in Boulder, Colorado.
The late Richard Hile served for nearly 30 years as a diplomat in Asia and Western Europe. He lived in Seattle, Washington. 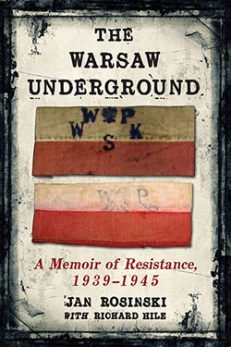 You're viewing: The Warsaw Underground $25.00
Add to cart