The War Aims and Strategies of Adolf Hitler

Many have commented upon Hitler’s inexplicable behavior during World War II. He failed to invade England; he neglected his air force; he engaged enemies on multiple fronts. Viewed in terms of Germany’s struggle against the West, these and other actions made little sense. In truth, however, the war against Western powers had little to do with Hitler’s grand plan: to conquer Russia and lands to the east of Germany, eradicate or enslave their populations, and create a vast Teutonic empire. In light of this goal, Hitler’s actions were consistent throughout. In line with his dictum of “All or Nothing,” once Hitler failed to defeat Russia in December 1941, he conducted the rest of the war with the sole purpose of inflicting maximum bloodshed and desolation, including upon Germany itself. Weakened, sensing defeat, he knew he was a drowning man—and he was determined to take friend and foe alike down with him.
This evaluation of Hitler’s objectives in World War II expands upon a theory gaining prominence among historians: Hitler’s true motive was a crusade against the East, and he had little interest in waging war with England, much less the United States. It examines the different nature of the war on the Eastern and Western fronts; the disparate treatment afforded the two groups of POWs and civilians; and Hitler’s scorched-earth policy, adopted after his primary objective proved beyond his grasp. In poignant, painful detail, it recreates the Russians’ devastating four-year struggle against Germany, which went much further towards ensuring its defeat than any of the comparatively belated Western efforts.

Oscar Pinkus survived both the German and Russian occupations of Poland, his homeland. A writer and engineer with six previous books to his credit, he lives in Albuquerque, New Mexico. 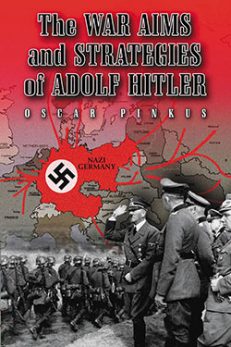 You're viewing: The War Aims and Strategies of Adolf Hitler $49.95
Add to cart