The biggest diaspora in Vietnamese history occurred between 1975 and 1992, when more than two million people fled by boat to escape North Vietnam’s oppressive communist regime. Before this well-known exodus from Vietnam’s shores, however, there was a massive population shift within the country. In 1954, one million fled from north to south to escape war, famine, and the communist land reform campaign. Many of these refugees went on to flee Vietnam altogether in the 1970s and 1980s, and the experiences of 1954 influenced the later diaspora in other ways as well.
This book reassesses the causes and dynamics of the 1975–92 diaspora. It begins with a discussion of Vietnam from 1939 to 1954, then looks closely at the 1954 “Operation Exodus” and the subsequent resettlements. From here the focus turns to the later events that drove hundreds of thousands of Vietnamese to flee their homeland in 1975 and the years that followed. Planning for escape, choosing routes, facing pirates at sea, and surviving the refugee camps are among the many topics covered. Stories of individual escapees are provided throughout. The book closes with a look at the struggles and achievements of the resettled Vietnamese. 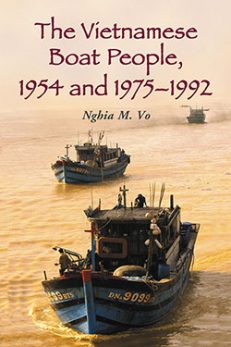