The Death and Afterlife of the Silent Film Idol

The circumstances surrounding the death of legendary star Rudolph Valentino have been a constant source of fascination for admirers worldwide. This work examines every aspect of his passing, analyzing the circumstances and gathering information into one convenient source for the Valentino scholar and enthusiast.
The first part examines every moment of the last days of Rudolph Valentino, his illness and operation, the reactions of such intimates as Pola Negri, and all controversy such as riots, suicides, and fights over his funeral and estate. Part two gives tours of Valentino-related sites in New York, Hollywood and West Hollywood, downtown and suburban Los Angeles, and Beverly Hills, explaining each site’s part in Valentino’s history, giving quotes from the star and his associates about the place, and describing its present state. Part three consists of eleven appendices giving such information as the infamous “Pink Powder Puff” editorial and Valentino’s responses, the medical diagnosis, operation on and treatment of the idol, tributes and eulogies, the list of mourners attending his funerals, his last will and testament, the summation of his estate, quotes about his death, references from newspapers, and a complete filmography.

Allan R. Ellenberger, the author of numerous books about the cinema, has written for such publications as Classic Images and Films of the Golden Age. He lives in Hollywood, California. 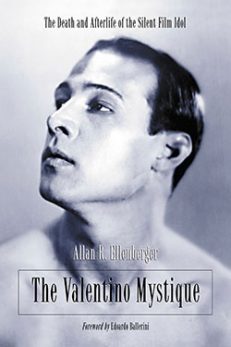 You're viewing: The Valentino Mystique $39.95
Add to cart