In 1940, the threat of war in the Pacific forced the United States to expand its fleet quickly. This effort included reconditioning and recommissioning “four stackers” from the navy’s reserve fleet. Built in 1918 to fight German submarines, the USS Ward earned at Pearl Harbor the distinction of firing the first shot in America’s war against Japan. In the three years that followed, it was bombed, shelled, strafed, and finally sunk (on December 7, 1944), yet none of her crew of 125 men ever lost a life in combat. Information is drawn from naval records as well as from interviews with surviving crewmen. Appendices provide Ward technical data, a chronology of major events, listings of citations earned in World War II and of amphibious landings, and a roster of personnel.

World War II historian Richard P. Klobuchar is a retired civil engineer in transportation. He frequently lectures on Pearl Harbor and is the author of Pearl Harbor: Awakening a Sleeping Giant. He lives in Rochester, Minnesota. 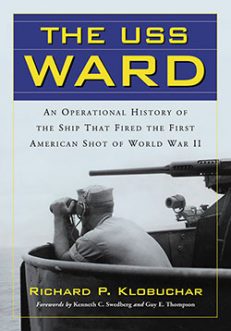