A History of Domestic and Overseas Actions

At home and overseas, the United States Coast Guard served a variety of vital functions in World War II, providing service that has been too little recognized in histories of the war. Teaming up with other international forces, the Coast Guard provided crewmembers for Navy and Army vessels as well as its own, carried troops, food, and military supplies overseas, and landed Marine and Army units on distant and dangerous shores.
This thorough history details those and other important missions, which included combat engagement with submarines and kamikaze planes, and typhoons. On the home front, port security missions involving search and rescue, fire fighting, explosives, espionage and sabotage presented their own unique dangers and challenges.

A member of the United States Coast Guard Reserve from 1961 to 1969, Thomas P. Ostrom taught anthropology, geography, and history at Rochester Community College in Minnesota before retiring. He is a member of the U.S. Life-Saving Service Heritage Association, U.S. Navy Memorial, Foundation for Coast Guard History, and Naval Historical Foundation.

“provides a thorough, comprehensive account of the Coast Guard’s wartime service”—Seapower; “extensively researched and well-written history”—Baird Maritime; “Ostrom gives us most enlightening lessons on the ‘Guardian of the Heartland’ that had previously been adequately recognized in U.S. combat history…World War II and Coast Guard history buffs alike will be pleased with Thomas Ostrom’s latest book. I can’t recommend this book highly enough”—Proceedings. 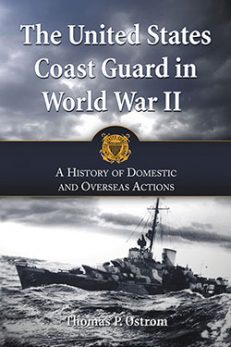