A History from World War I to the Present

In addition to port security, ship inspection and safety, law enforcement, and search and rescue, the U.S. Coast Guard assumes an important role in national defense at home and abroad. To that end, the Coast Guard has carried out separate and coordinated missions with other armed forces from the Great Lakes to the Atlantic, Pacific, Gulf of Mexico, Mediterranean, Persian Gulf, and North Polar region. This chronicle of the Coast Guard’s contributions to national defense examines participation in World War I, World War II, Korea, the Cold War, Vietnam, and the War on Terror. Among the topics explored are defense threats, drug trafficking, and border security, as well as Coast Guard personnel, training, leadership, and assets.

A member of the United States Coast Guard Reserve from 1961 to 1969, Thomas P. Ostrom taught anthropology, geography, and history at Rochester Community College in Minnesota before retiring. He is a member of the U.S. Life-Saving Service Heritage Association, U.S. Navy Memorial, Foundation for Coast Guard History, and Naval Historical Foundation.

“a solid overview of this often-overlooked service. Recommended”—Choice; “an outstanding reference for those who are unfamiliar with the many roles of the Coast Guard”—Nautical Research Journal; “Professor Ostrom does it again. Coast Guard History buffs will enjoy his latest book, a much-needed contribution to the field…the book should be required reading for everyone who wears a Coast Guard uniform”—Proceedings. 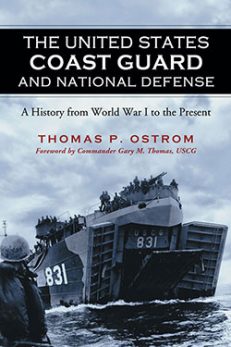 You're viewing: The United States Coast Guard and National Defense $35.00
Add to cart