The Underground Railroad on the Western Frontier

Escapes from Missouri, Arkansas, Iowa and the Territories of Kansas, Nebraska and the Indian Nations, 1840–1865

All along the mid–1800s Western frontier, the path of fugitive slaves in the Underground Railroad was filled with danger. An escapee who managed to avoid violence still was hard-pressed to survive in a place of frequent drought and illness, where newly settled sympathizers were often unable to give accurate descriptions of the topography, climate, or food sources.
This book details the history and development of the Underground Railroad in Arkansas, Missouri, Iowa, Kansas, Nebraska, and Oklahoma. Topics include lesser known escape routes into Mexico and the American Indian nations, the sacking of Lawrence, Kansas, and guerilla warfare; escapees’ use of steamboats along the Mississippi and Missouri rivers; and the activities of John Brown, James Montgomery, Dan Anthony, and others. 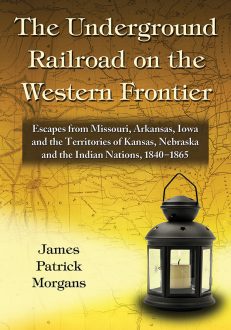 You're viewing: The Underground Railroad on the Western Frontier $29.95
Add to cart