The Turn to Gruesomeness in American Horror Films, 1931–1936

Critics have traditionally characterized classic horror by its use of shadow and suggestion. Yet the graphic nature of early 1930s films only came to light in the home video/DVD era. Along with gangster movies and “sex pictures,” horror films drew audiences during the Great Depression with sensational content.
Exploiting a loophole in the Hays Code, which made no provision for on-screen “gruesomeness,” studios produced remarkably explicit films that were recut when the Code was more rigidly enforced from 1934.
This led to a modern misperception that classic horror was intended to be safe and reassuring to audiences.
The author examines the 1931 to 1936 “happy ending” horror in relation to industry practices and censorship. Early works like Murders in the Rue Morgue (1932) and The Raven (1935) may be more akin to The Texas Chain Saw Massacre (1974) and Hostel (2005) than many critics believe.

2. “Five reels of transgression followed by one reel of retribution”: Thirties Horror and the Studios 39

3. “Brutality, horror and gruesomeness”: Thirties Horror and the Hays Office 141

4. “Why should Cecil B. De Mille have a monopoly on torture and cruelty?” Thirties Horror and the Filmmaker 164

5. “A secure universe”? Thirties Horror and the Critics 184

“the book on ‘classic horror’ to beat”—Video Watchdog; “Towlson’s book is ridiculously informative, and yet still a well-paced, entertaining read. This is not only one of the best horror history books I’ve read this year, but stands as one of the best on the golden age ever written”—Killer Reviews. 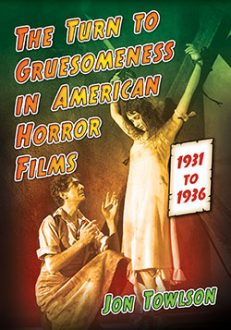