The Truth of Buffy

Seemingly the most fantastical of television series, Buffy the Vampire Slayer proves on close examination to be firmly rooted in real-world concerns. In this collection of critical essays, 15 authors from several disciplines, including literature, the visual arts, theatre, philosophy, and political science, study ways in which Buffy illuminates viewers’ real-life experiences.
Topics include the series’ complicated portrayals of the relationship between soul, morality, and identity; whether Buffy can truly be described as a feminist icon; stereotypes of Native Americans in the episode “Pangs”; the role of signs in the interaction between Buffy’s aesthetics and audience; and the problem of power and underhanded politics in the Buffy universe.

Emily Dial-Driver is a professor of English at Rogers State University in Claremore, Oklahoma, and fiction editor of RSU’s Cooweescoowee: A Journal of Arts and Letters.

Sally Emmons is an associate professor of English at Rogers State University and the managing editor of Cooweescoowee.

Jim Ford teaches humanities, philosophy, and religion at Rogers State University and is director of the honors program. His articles have been published in the Journal of Religion, the Journal of the National Collegiate Honors Council, and Honors in Practice.

Carolyn Anne Taylor is an associate professor of political science at Rogers State University and previously served in the Oklahoma House of Representatives. She lives in Claremore, Oklahoma. 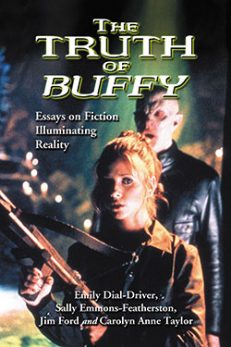