The Civil War affected the entire American landscape in ways not always fully considered. It determined the political future of a nation—but also its scientific and cultural development. The war cost America many of its best and brightest in every realm. James A. Leonard was one such loss: a brilliant up-and-coming chess player in 1861–62 before he made the decision to serve his country during wartime.
Born November 6, 1841, Leonard was the son of a poor Irish immigrant—but even a poor child could play the game of kings. He grew up in a time when interest in chess was experiencing a revival, and contemporaries such as Paul Morphy, Eugene Delmar and Leonard’s mentor Philip Richardson captured much interest. Leonard defeated a number of the country’s best players and was widely viewed as the “New Morphy.”
This biography discusses what is known of Leonard’s life but concentrates primarily on his talent and his sadly shortened career. Game scores and diagrams from 96 games are included, with details of place, date and opponents.

John S. Hilbert is the author of over a dozen books and more than 100 articles on chess history. He lives in Buffalo, New York. William H.K. Pollock is his fifth McFarland title.

“very scholarly…wonderful”—Chess Horizons; “highly recommended”—IM John Donaldson (JeremySilman.com); “one of his most fascinating books…impeccably produced…in-depth look at one of the most enthralling periods in American chess history…readers who cannot get enough chess history will indeed welcome this book…an exceptional piece of chess scholarship…one of the most detailed accounts ever written of American chess bridging the Nineteenth and Twentieth Centuries…fans of chess history and chess culture in general will be overjoyed to add this title to their library”—ChessCafe.com; “a fascinating read, beautifully produced…will enhance any chess library”—Time Trouble Chess Magazine; “excellent…one of the most enjoyable chess books I have read in quite some time”—Chess Today; “some chess publications never grow old and this book by the American chess historian John S. Hilbert is one of them…like other books by Hilbert, this one too maintains a high professional standard”—Quarterly for Chess History. 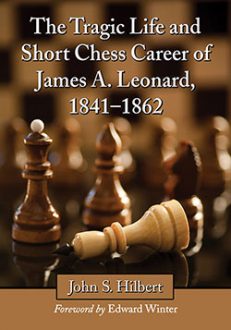