Black Friday and the Fall of the 1977 Phillies

On Friday, October 7, 1977, the Philadelphia Phillies experienced some of the highest highs and lowest lows in their then 94-year history—all within the span of a single grey afternoon. An afternoon that turned so dark so fast that Phils fans would refer to it forever after as Black Friday. Following a 1976 season in which the perennial laughingstock of a franchise won 101 games, the ’77 Phillies had been even better. With a lineup that featured Mike Schmidt and Greg Luzinski in their primes, a rotation anchored by Steve Carlton, and perhaps the deepest bench and bullpen in baseball history, these Phillies took a back seat to nobody. So when they faced Los Angeles in the NLCS, few thought the Dodgers stood much of a chance. After splitting the first two games of the five-game series in LA, the clubs arrived at Veterans Stadium that afternoon with Phillies fans anticipating a coronation. And after jeering a jittery Burt Hooton off the mound and watching their Phils take a 5–3 lead into the ninth, everything was going according to plan. Until it wasn’t. Within ten minutes everything had spectacularly imploded. Even now, four decades later, Phillies fans debate just how and why it all went so wrong so suddenly. The Ten-Minute Collapse: Black Friday and the Fall of the 1977 Phillies transports you back to that October afternoon and parks you behind the plate at the Vet where you can experience it all as if you were there for every exhilarating, exasperating moment.

E-singles available directly from McFarland are usually available in both epub and PDF formats.  Where both exist, your purchase entitles you to both.  The files are DRM-free and are available to you for subsequent download in your customer account page.

Mitchell Nathanson is a professor of law and a professor in the Jeffrey S. Moorad Center for the Study of Sports Law at Villanova University School of Law. 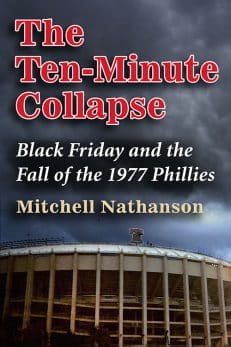 You're viewing: The Ten-Minute Collapse $9.99
Add to cart