A Handbook of Religious, Legal and Social Issues

The founders of the United States were well aware of religious differences in the new nation. Oppression had forced varied European religious groups to seek homes elsewhere, some in the new world of America. Governmental pressures toward conformity in religion had in the past led to corruption and civil strife. Thus, Congress made a dual assertion in its First Amendment to the Constitution: “Congress shall make no law respecting an establishment of religion, or prohibiting the free exercise thereof.” However, the ethical foundations of American society—and therefore its laws—intermingle with the moral codes of religions, including the Judeo-Christian Ten Commandments.
This handbook helps bring understanding and meaning to the controversies that have arisen in present day society over the application of the Ten Commandments to public law and moral problems. Applications can be logical and legal, or can violate the separation of church and state called for in the First Amendment. Part One provides background on the Ten Commandments. It gives the various versions found in the Old Testament, and explains the non–Israelite influences on those versions (the Hammurabi Code, for example). The moral thinking of the ancient Mesopotamian, Egyptian and Hebrew cultures is examined. The modern Jewish tradition is detailed, as well as the different interpretations placed on the Ten Commandments by Roman Catholics, Anglicans, Lutherans and other Protestants. Part Two focuses on the modern controversies, assessing the differing sides of each. Among the many controversies covered are government funding of faith-based charities, posting the Ten Commandments in public buildings, science versus religion in schools, prayer in public places, blue laws, stem cell research, cloning, euthanasia, capital punishment, abortion and war, racial profiling and covenant marriages.

Now retired, Joseph P. Hester taught at the university level for ten years, at the public school level for ten years, and served as a public school administrator for seventeen years. He holds the Master in Theology from Southeastern Seminary, Wake Forest, and the Ph.D. in Philosophy from the University of Georgia, Athens. He has written extensively on ethics, philosophy and education and is also the author of Ethical Leadership for School Administrators and Teachers and Public School Safety: A Handbook, with a Resource Guide (both in 2003). He lives in Claremont, North Carolina.

PART I: THE HISTORY AND MEANING

Versions of the Ten Commandments     14

Analysis of the Ten Commandments     17

Interpretation of the Ten Commandments     19


2. Ethical Inquiry and the Development of Morality

The Development of Moral Thinking in Ancient Cultures     33

Controversy: Religion, Science, and the Schools—Evolution or Creationism?    145

Controversy: Is Euthanasia Ever Morally Correct?     212


7. “Thou Shalt Not Bear False Witness”

“thorough notes are included…useful…recommended”—Choice; “commentary is balanced and well-researched”—C&RL News; “interesting information”—The Society for Old Testament Study; “useful”—ARBA; “discussion throughtout is comprehensive, lucid and serves in many ways as an introduction to general ethical theory. This is enhanced by extensive references to North American legal cases, bibliographies, references and a glossary”—Theological Book Review. 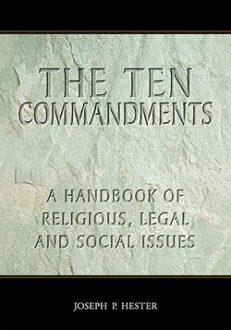 You're viewing: The Ten Commandments $39.95
Add to cart