Essays on the Real Impacts of Fake News

The Daily Show with Jon Stewart and The Colbert Report have attracted much interest in recent years from popular audiences as well as scholars in various disciplines. Both Jon Stewart and Stephen Colbert have been named on Time magazine’s list of the most influential people in the world. The ten essays in this interdisciplinary collection explore the issues engendered by the popularity of entertainment news, including the role of satire in politics, the declining level of trust in traditional sources of media, the shows’ cathartic or informational function, and the ways in which these shows influence public opinion.

Amarnath Amarasingam is a doctoral candidate in the Laurier-Waterloo Ph.D. program in religious studies and holds a Social Sciences and Humanities Research Council of Canada doctoral fellowship. He has published articles in Studies in Religion, The Journal of Contemporary Religion, Canadian Ethnic Studies, Muslim Minority Affairs, The Journal of Religion and Film, and Mental Health, Religion, and Culture.

Introduction: Surveying Scholarship on The Daily Show and The Colbert Report
JOSH COMPTON  9

PART I. NEW RESEARCH ON THE DAILY SHOW AND THE COLBERT REPORT

The Science of Satire: The Daily Show and The Colbert Report as Sources of Public Attention to Science and the Environment
LAUREN FELDMAN, ANTHONY LEISEROWITZ, and EDWARD MAIBACH  25

Making Sense of The Daily Show: Understanding the Role of Partisan Heuristics in Political Comedy Effects
MICHAEL A. XENOS, PATRICIA MOY, and AMY B. BECKER  47

Is Fake News the Real News? The Significance of Stewart and Colbert for Democratic Discourse, Politics, and Policy
MARK K. MCBETH and RANDY S. CLEMONS  79

It’s All About Meme: The Art of the Interview and the Insatiable Ego of the Colbert Bump
KEVIN A. WISNIEWSKi  164

Real Ethical Concerns and Fake News: The Daily Show and the Challenge of the New Media Environment
BRUCE A. WILLIAMS and MICHAEL X. DELLI CARPINI  181 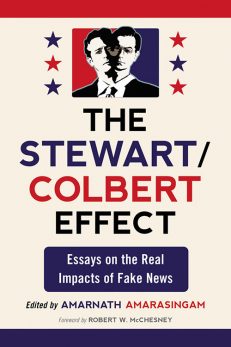 You're viewing: The Stewart/Colbert Effect $19.99
Add to cart