The Six Marine Divisions in the Pacific

Every Campaign of World War II

In the island battles of World War II, the United States Marine Corps came into its own. From a force previously numbering 55,000, the ranks of the Marines swelled to 480,000. With Pacific theater command essentially divided geographically between General Douglas MacArthur and Admiral Chester W. Nimitz, these forces found themselves under the command of the Army or Navy depending on their particular location. On land and at sea, the contribution which the six Marine divisions made to the Allied victory in the Pacific cannot be ignored. Concentrating on the infantry units, this volume provides a brief history of each of the six Marine divisions which took part in the Pacific conflict. Beginning with a chronology of the war in the Pacific, it succinctly describes each campaign through the eyes of a specified division, focusing on the division’s exact movements and actions. Some battles and operations are covered from different perspectives because of the presence of multiple divisions. An initial section contains brief biographical sketches of key players in the Pacific arena. Extensive maps and photographs are also included.

The late George B. Clark, military historian and former Marine, wrote about World War I, World War II, and the United States Marine Corps. He lived in Pike, New Hampshire. 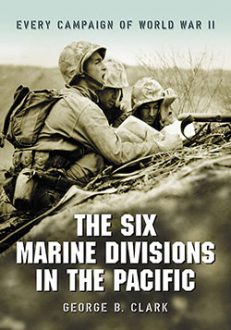 You're viewing: The Six Marine Divisions in the Pacific $49.95
Add to cart