A No-Nonsense Guide to No-Budget Filmmaking

When someone offered Michael DiPaolo $5,000 to help make a Digital Video horror film, he jumped at the chance to test a theory: an ultra-low budget feature, shot in less than a week, with a paid cast and crew, could be successful if meticulously planned. Using one computer and one camcorder, he produced and edited Daddy, which had its theatrical premier in New York City in 2004.
This book breaks down the production through a detailed daily diary, emphasizing that the most important aspects of successful producing are careful planning and camaraderie in the group. The work covers many points important for the low-budget filmmaker, including selecting a story; budgeting; scheduling; picking cast and crew; scouting locations; finding wardrobe, food, and transportation; and what to do if you run out of time or money. Postproduction is also covered (editing, computer work, and sound design), as is the result of all this hard work: screenings, festivals, and distributors. One chapter covers the primacy of cinematic point-of-view, and another profiles some role models for the aspiring low-budget filmmaker: Edgar Ulmer, Val Lewton, Roger Corman, John Cassavetes, Ed Wood, Jr., and Jean-Luc Godard. Later chapters explain strategy and tactics of guerrilla filmmaking and show the budding filmmaker how to recognize both his limitations and his strengths.

Michael P. DiPaolo began by writing, producing, and directing feature-lengths based on fictionalized variations of the confessions he heard working at the Brooklyn District Attorney’s Office. He has spent more than 15 years in independent features working as a writer, director, producer, cameraman, and editor.

PART I: Making a Horror Film in Six Days

PART III: How to Be a Guerrilla Filmmaker 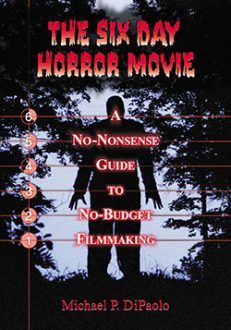