Fashion is synonymous with change yet the iconic showgirl costume–feathers, sparkle and revealing clothes–has remained largely unchanged since the early 20th century. Beginning in the 1800s, a couture of the risque evolved from Paris nightclubs to Las Vegas casinos. The concept of glamour itself was based on what Parisian courtesans and burlesque performers wore. A tall pretty girl with headdress, nude core with spangles, high heels and dramatic makeup became a Gallic symbol and later the trademark of Hollywood musicals. France exported costumes and millinery–as well as whole productions from the Moulin Rouge, the Lido and Folies Bergere –to the U.S. and the world. More recently, cabaret styling has translated into today’s day, sport and evening clothes.

Jane Merrill has published in 50 national magazines and has written books on fashion, lifestyle, and eighteenth century culture. She lives on the St. George Peninsula in Maine. 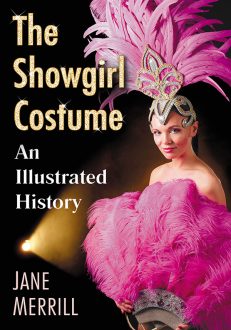 You're viewing: The Showgirl Costume $39.95
Add to cart