The Science Fiction of Phyllis Gotlieb

Gotlieb is a writer central to the Canadian science fiction canon. Though she has been called the queen of Canadian SF by Robert J. Sawyer, and though David Ketterer has suggested that she is Canadian SF, Gotlieb has been largely overlooked by SF studies. This book delves deeply into her body of work and traces her career in detail. Offering close readings of Gotlieb’s novels, short stories (including ones not reprinted since their initial appearances), and SF–related poetry, this study explores Gotlieb’s development as a writer and her characteristic themes.
The book also references her manuscripts when the differences between them and the published stories provide insights into her working methods. The book enumerates and analyzes Gotlieb’s innovative explorations of common SF tropes such as the superhuman, human-alien interaction, and the galactic empire, her prevalent thematic concerns (e.g., reproduction, colonization, the mind-body relationship, the essence of “humanity”) as well as her stylistically dense and literary approach to the genre.

“Masterful. This is a much-needed study of the complete works of a writer who deserves more scholarly attention.”—Amy Ransom, Vice-President of the Science Fiction Research Association. 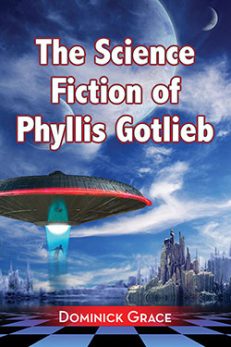 You're viewing: The Science Fiction of Phyllis Gotlieb $29.95
Add to cart