Post–9/11 fiction reflects how the September 11, 2001, attacks have influenced our concept of public space, from urban behavior patterns to architecture and urban movement. It also suggests a need for remapping the real and imagined spaces where we live and work. Through close readings of novels from both sides of the Atlantic, this analysis of the literary 21st century metropolis explores the fictional post–9/11 city as a global space not defined or contained by its physical limits.

Karolina Golimowska teaches at Humboldt-Universität in Berlin. She is also a translator and an author of short prose and journalistic pieces. In 2014 she was awarded with the German-Polish Journalism Award.

Part One: New York
I. ­Remapping New York City in Jonathan Safran Foer’s Extremely Loud and Incredibly Close 39
II. Metropolis as Source of Literary Energy: Teju Cole’s Open City 55
III. The Ambiguity of the Other in Mohsin Hamid’s The Reluctant Fundamentalist and H.M. Naqvi’s Home Boy 70
IV. The Plurality of Voices and Urban Paths in Amy Waldman’s The Submission: The Metaphors of Submission 98

“this book is a useful addition to studies of the contemporary metropolis in literature, especially in relation to trauma studies and post-9/11 studies”—Ethnic & Third World Literatures Review of Books. 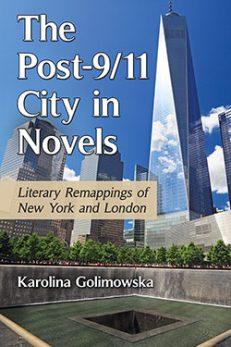