Among the great tragedies that befell Poland during World War II was the forced deportation of its citizens by the Soviet Union during the first Soviet occupation of that country between 1939 and 1941. This is the story of that brutal Soviet ethnic cleansing campaign told in the words of some of the survivors. It is an unforgettable human drama of excruciating martyrdom in the Gulag. For example, one witness reports: “A young woman who had given birth on the train threw herself and her newborn under the wheels of an approaching train.” Survivors also tell the story of events after the “amnesty.” “Our suffering is simply indescribable. We have spent weeks now sleeping in lice-infested dirty rags in train stations,” wrote the Milewski family. Details are also given on the non-European countries that extended a helping hand to the exiles in their hour of need.

Tadeusz Piotrowski is a professor of sociology at the University of New Hampshire in Manchester where he also teaches courses in anthropology and the Holocaust, and where he served as the Associate Dean of Faculty. He has received many awards including the Outstanding Associate Professor Award. He lives in Manchester.

“well-written, well-researched…moving”—History: Reviews of New Books; “excellent…of great interest”—Journal of Cold War Studies; “Piotrowski has performed a most valuable service in presenting the memoirs of several Polish families deported to the USSR…. While some Polish memoirs of the deportations and suffering in the USSR have been cited in other books, here they are presented more extensively. This book certainly deserved reprinting in a paperback edition”—Journal of Slavic Military Studies. 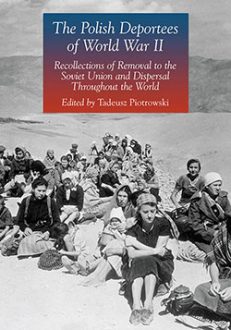 You're viewing: The Polish Deportees of World War II $29.95
Add to cart