The Playing Grounds of College Football

A Comprehensive Directory, 1869 to Today

College football teams today play for tens of thousands of fans in palatial stadiums that rival those of pro teams. But most started out in humbler venues, from baseball parks to fairgrounds to cow pastures. This comprehensive guide traces the long and diverse history of playing grounds for more than 1000 varsity football schools, including bowl-eligible teams, as well as those in other divisions (FCS, D2, D3, NAIA).

Mark Pollak is an attorney living in Baltimore, Maryland. 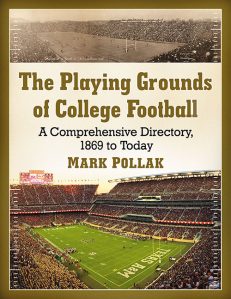 You're viewing: The Playing Grounds of College Football $95.00
Add to cart