Confessions of a Pig Pilot in the Early 1970s

Superbly written, this is an account by a participant in the airlift that supplied the blockaded capital of the Khmer Republic and several provincial capitals with food and other necessities of life during the last year of the United States’ direct involvement in the Indochina War. Civilian pilots from many nations stepped in to fill the gap left by the departing American armed forces; they had to contend not only with makeshift facilities and heavy fire from the invading Vietnamese but also with a monumentally inept and corrupt Cambodian bureaucracy, which hindered the effective operation of the airlift in countless way.

Charles W. Heckman spent two years of combat service in Vietnam as an U.S. Air Force pilot and subsequently supported the anticommunist forces in Southeast Asia as a civilian pilot. He is now a biologist living in Hamburg, West Germany. 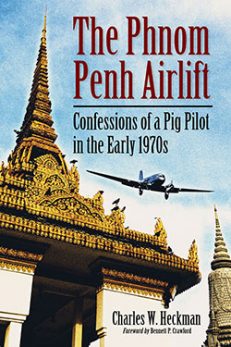 You're viewing: The Phnom Penh Airlift $25.00
Add to cart