The Opera Singer and the Silent Film

Film technology developments in the early 20th century opened up a new world of possibilities for the motion picture industry, and opera, relying as it did on the melodramatic storyline and grand pantomime acting, was an ideal subject for early silent film. Even deprived of their principal glory—their voices—opera singers were among the first prominent screen stars.
This book examines the relationship between the established operatic stars of the late 19th and early 20th centuries and the newly developing motion picture industry. It concentrates primarily on developments between 1895 and 1926, from the invention of the commercially exploitable motion picture to the coming of viable sound on film. Early chapters discuss the changing role of the opera star prior to and during the development of film as a popular commercial medium, and explore the technological innovations that eventually enabled opera to move out of the strict confines of the opera house and to be viewed by a global audience. Later chapters expose the fragile relationship between art and the entertainment industry in the early decades of the motion picture, and show how the opera helped establish a balance between film as a new art form and its commercial exploitation. Also discussed is the extent to which the inclusion of opera in early motion pictures contributed to the broader democratization of art. The book concludes with four detailed case studies that examine the experiences of operatic performers who made the transition to the silent screen and who made a notable impact on the early movie industry. An extensive filmography is included to provide the reader with full details of films cited and archival locations of surviving materials.

Paul Fryer is an academic, author, editor and researcher, based in Kent (UK). He has lectured and presented film screenings internationally and is a visiting professor at the Universities of Leeds, London South Bank and East London. 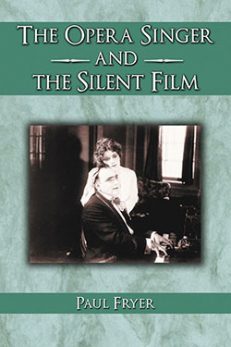 You're viewing: The Opera Singer and the Silent Film $75.00
Add to cart