Essays on the 2010 Performance and the Centuries-Long Tradition

Every ten years since 1634, the Bavarian village of Oberammergau has performed the world’s most famous Passion Play, recounting the last days of Jesus Christ. In 2010, presenting the play for the 41st time, the village broke with tradition to offer a new interpretation for a post-millennial, international audience.
Drawing on interviews with villagers and international responses, this collection of new essays provides an analysis of the play by scholars who attended. Topics include changes in response to charges of anti–Semitism, how the play defines the village, how the performance changes the audience, and a comparison of Oberammergau 2010 with American Passion Plays, Indian pilgrimage drama and other German Passion Plays.

Kevin J. Wetmore, Jr., is a professional actor and director whose previous books have covered topics ranging from Star Wars to Renaissance faires. He is a professor and chair of the theater department at Loyola Marymount University in Los Angeles, California.

The Role of Their Lives, or Jesus on a Bike: Oberammergau on Stage and Off (Glenn Ehrstine) 16

“What’s a nice Jewish boy like you doing in a Catholic play like this?”: Oberammergau 2010 and Religious Identity (Kevin J. Wetmore, Jr.) 32

Dialectical Aesthetics of Change and Continuity in the 2010

Tableaus and Selves in Vrindavan and Oberammergau (David Mason) 108

Passion Playing: An Interview with Sarah Ruhl on the Shaping

Conclusion: ­Forty-Second in the ­Twenty-First: Oberammergau 2020 176

“fills something of a gap, there are surprisingly few serious scholarly engagements with Oberammergau…Wetmore has gathered essays that probe the history, aesthetics, and cultural analogues and resonances of the Bavarian pageant…well-researched discussion of the US reception and reimaginings of the play…recommended”—Choice. 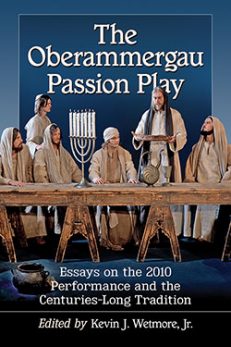 You're viewing: The Oberammergau Passion Play $39.95
Add to cart