The Norman Conquest of Southern Italy and Sicily

The Normans originally came to Italy and Sicily in the 11th and 12th centuries looking for adventure or a livelihood, but once there, found opportunity for fame and fortune. The story of the Norman conquest in Italy and Sicily is indeed one of knights and adventurers, great battles and lowly pillage, opportunism and statesmanship, and crusade and coexistence. This rich and often dramatic study focuses on the eight sons of Tancred of Hauteville, especially Robert Guiscard, who has been called “the most dazzling military ruler between Julius Caesar and Napoleon,” and his youngest brother Roger, who conquered Sicily. It discusses how they expanded their lands throughout southern Italy, and then took Sicily from its Muslim rulers. The brothers, often in conflict with each other, challenged both the Papacy and the Byzantine Empire, became the main supporters of the reformed Papacy, and founded a rich, sophisticated kingdom that lasted until the nineteenth century. 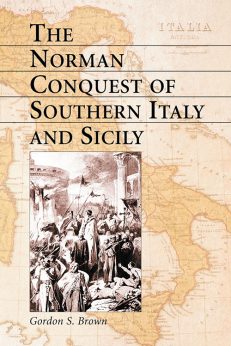 You're viewing: The Norman Conquest of Southern Italy and Sicily $29.95
Add to cart