Recent years have been among the most challenging in NFL history, culminating in the 2020-21 coronavirus and social justice issues. Yet a complete understanding of where the NFL is today begins with a five-year period that was the most transformative for the league. From 1957 to 1962, the NFL saw: the advent of unionization, with a landmark Supreme Court decision; the legendary 1958 title game, the first to go into sudden death overtime; a challenge from the American Football League that would have important consequences for decades; the introduction of computerization and statistical analysis; the first steps towards globalization; and the hiring of legends Vince Lombardi and Tom Landry, who both contributed to the league’s growing mythology.

This book describes in detail the key events that helped shape the modern NFL, and why this period was so momentous to the league and its fans.

Brad Schultz is the pastor of Zion Evangelical Church in Shelbyville, Indiana. He previously spent 30 years in sports media as a television anchor and reporter, documentary producer and professor of journalism. He has written 14 books on sports media and history. 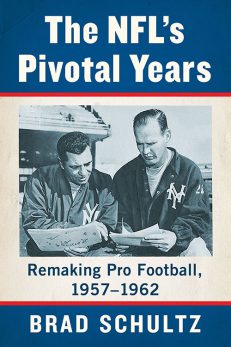