The Nature of War

Origins and Evolution of Violent Conflict

For over 12,000 years human beings have warred, slaughtering each other with persistence and brutality. From spear point to thermonuclear ordnance, human ingenuity has had a serious downside. In the 20th century alone, wars claimed more than 90 million lives. Yet war’s origins, meaning, and evolution over the millennium remain to this day a mystery. Why is warfare “almost” as old as man himself? How is it that a creature capable of producing great art, architecture, literature, medicine, and wondrous acts of compassion is simultaneously capable of such cruel and wanton slaughter? To answer these and other questions, this thoughtful study journeys across time and disciplines to examine and sensibly explain human warfare, clarify its source and driving energy, and thoughtfully develop the prospect of a true and lasting peace.

Jim Stempel is an authority of the Eastern campaigns of the American Civil War. His articles on psychology, human development, and warfare have also appeared in the New Times, Concepts In Human Development, and North & South. He lives in western Maryland. 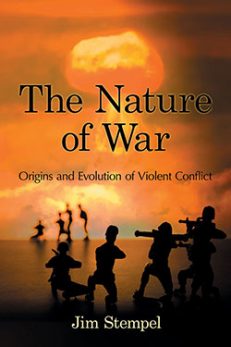