The Mind of Italo Calvino

A Critical Exploration of His Thought and Writings

At the time of his death, Italo Calvino was internationally regarded as one of Italy’s greatest twentieth century writers. His approach to literature was remarkably adventurous, and he produced a thought-provoking oeuvre. It invited readers to engage themselves with radical thoughts and philosophies, an approach lamentably scarce in contemporary global culture.
This book examines Calvino’s works of fiction in the context of the philosophical ideas he advanced in his theoretical and critical works. His was an extraordinarily versatile mind, keen on experimenting with a dazzling variety of both fiction and nonfiction forms.

Dani Cavallaro has written widely about literature, cultural theory, and anime. She lives in London.

3. Eccentric Cosmologies: Cosmicomics and Time and the Hunter      41

5. Structures and Their Explosion: The Castle of Crossed Destinies      90 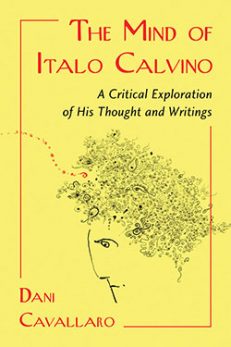 You're viewing: The Mind of Italo Calvino $29.95
Add to cart