Mexican cinema has largely been overlooked by international film scholars because of a lack of English-language information and the fact that Spanish-language information was difficult to find and often out of date. This comprehensive filmography helps fill the need.
Arranged by year of release and then by title, the filmography contains entries that include basic information (film and translated title, production company, genre, director, cast), a plot summary, and additional information about the film.
Inclusion criteria: a film must be a Mexican production or co-production, feature length (one hour or more, silent films excepted), fictional (documentaries and compilation films are not included unless the topic relates to ­Mexican cinema; some docudramas and films with recreated or staged scenes are included), and theatrically released or intended for theatrical release.

David E. Wilt is a librarian at the University of Maryland in College Park.

Appendix: Direct-to-Video and Made for Television Movies      677 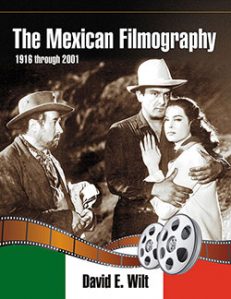