The Man Who Made the Monitor

Mention Civil War naval confrontations and the Monitor instantly springs to mind. The first of the ironclads, the Monitor not only took part in a major battle, it forever changed the face of naval construction. But who was the man behind the ship? Born in Filipstad, Sweden, in 1803, the brilliant and somewhat eccentric engineer John Ericsson spent his childhood observing his father’s work in mining and later learned his engineering skills at the North Atlantic–Baltic canal. As a young man Ericsson turned to a variety of projects. In England, he introduced the ship’s propeller, built an Arctic expedition vessel and designed some of the first successful steam locomotives. Moving to New York in 1839, he soon teamed up with Harry Cornelius Delameter of the Phoenix foundry, a partnership which resulted in Ericsson’s most famous work, the USS Monitor.
Focusing on the man behind the inventions, this book tells the life story of John Ericsson. It details a number of Ericsson’s inventions including a steam-powered fire engine, the first screw-propelled warship, a variety of “hot-air engines,” and early experiments in solar power from the roof of his Manhattan home. The main focus is Ericsson’s design and construction of the ironclad USS Monitor. One of the first viable armored warships, the Monitor revolutionized naval warfare the world over. The ship’s battle with the CSS Virginia at Hampton Roads and its eventual fate off the coast of Cape Hatteras are covered. Ericsson’s relationships with contemporaries such as Alfred Nobel and recent developments concerning the recovery of the wreck of the Monitor are also examined.

Olav Thulesius was professor at Indiana University, University of Trondheim, and Kuwait University. The author of Harriet Beecher Stowe in Florida, 1867 to 1884 (2001), he divides his time between the United States and Sweden. 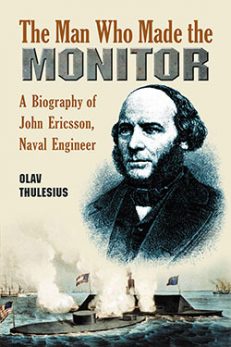