The Man from Scottsboro

Clarence Norris and the Infamous 1931 Alabama Rape Trial, in His Own Words

In March 1931, Clarence Norris, a self-described hobo, and eight other black men were arrested in Paint Rock, Alabama, and charged with raping two white girls who were also hoboes on the train he was riding. The one day trial of the nine men, better known as the “Scottsboro Boys” resulted in conviction and the death sentence despite a paucity of evidence. Though later pardoned, Norris spent 13 years in jail. (He died in 1989.)
Clarence Norris’s description of his arrest, trial and sentencing is both tragic and inspirational. His letters to his family, attorneys and supporters show his spirit as he struggled against a biased judicial system. A lengthy 1980 interview with Norris is supplemented by contemporary newspaper accounts of the trial, articles by Supreme Court Justice Felix Frankfurter and Alabama Appeals Court Judge James E. Horton, and legal opinions of the defendants’ attorney, Samuel S. Leibowitz.

Appendix E. The Scottsboro Case: Opinions of Judge James E. Horton of the Alabama Circuit Court Granting a Motion for a New Trial in the Scottsboro Case on the Ground That the Conviction Was Against the Weight of the Evidence      195 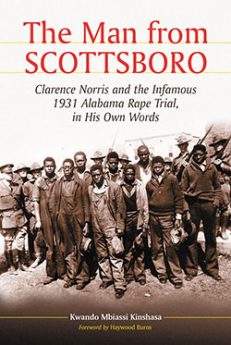 You're viewing: The Man from Scottsboro $29.95
Add to cart