The Making of The Magnificent Seven

Behind the Scenes of the Pivotal Western

The story behind The Magnificent Seven could have been a movie in itself. It had everything—actors’ strike, writers’ strike, Mexican government interference and a row between the screenwriters that left one removing his name from the credits, all under the lingering gloom of post–McCarthy era Hollywood. A flop on release, it later became a box office hit. This book tells the behind-the-scenes story: how Yul Brynner became the biggest independent producer in Hollywood; why John Sturges was not the first choice after Brynner surrendered the director’s chair; why Sturges quit; the truth about the Mirisch Company (producers); the details of the film’s botched release and unlikely redemption; the creation of Elmer Bernstein’s classic score; and how internecine fighting prevented the making of the television series in 1963. Myths about Steve McQueen, his feud with Brynner and the scene-stealing antics of the cast are debunked. A close examination of the various screenplay drafts and the writers’ source material—Akira Kurosawa’s Seven Samurai—shows who wrote what. Extensive analysis of Sturges’ directorial work is provided. 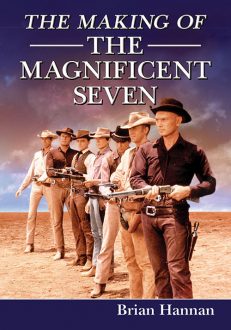 You're viewing: The Making of The Magnificent Seven $29.95
Add to cart