The Major League Pennant Races of 1916

“The Most Maddening Baseball Melee in History”

Baseball at its best is a combination of chess match and gladiatorial combat, waged over a long season but turning on split-second decisions and physical instincts. The 1916 season demonstrated the drama that made the sport the national pastime: tight pennant races, multiple contenders, record-breaking performances, and controversy, both on and off the field. Ten of the 16 teams battled for first place, four pitchers started and won both games of a doubleheader, Babe Ruth pitched on Opening Day, and players from the Federal League became the sport’s first free agents. The book features full rosters, player biographies, statistics, photographs and an appendix of the sportswriters who chronicled the season.

Paul G. Zinn is a sales manager for a virtual communications software company and was a sportswriter at three daily newspapers. He lives in Acton, Massachusetts.
A long time member of the Society for American Baseball Research, John G. Zinn is the author of three books about the Brooklyn Dodgers and numerous articles and essays about the history of baseball. His blog on baseball history can be found at http://amanlypastime.blogspot.com. 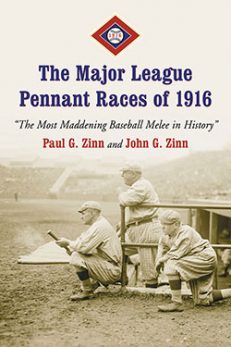