Over the past 60 seasons, the Los Angeles Dodgers have risen to the pinnacle of Major League Baseball, winning 21 National League pennants and 6 World Series titles. Amid the backdrop of Hollywood glitz and glamor, the iconic franchise owes its consistent success to the talents and efforts of many. This encyclopedia provides stats and biographical details for all of them. Sections cover the 1958–2016 seasons, influential players and executives, Dodgers traditions, and season and career records. An all-time player roster and list of all-time managers are included.

Richard J. Shmelter is a writer and researcher specializing in sports history, American crime during the Prohibition era, and Hollywood history. A member of the International Association of Crime Writers, the American Crime Writers League, and the Professional Football Researchers Association, he is the author of five previous books and lives in Sagamore Hills, Ohio. 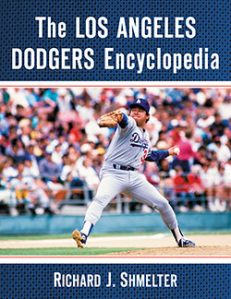 You're viewing: The Los Angeles Dodgers Encyclopedia $49.95
Add to cart