The Officials, Clergy, Businessmen and Journalists Who Backed the American South During the Civil War

Although the British government declared its neutrality during the American Civil War, London nevertheless became an important center of Confederate overseas operations. This work examines the extensive Confederate activities in London, including diplomacy, propaganda, purchasing for the Army and Navy, spying, Cotton Loan, and various business associations.
Reflections of the Civil War in British art and literature; and the extent of British support for the South are revealed. And appendices cover London firms with Confederate links, pro–Confederate publications, Confederate music published in London, the Southern lobby in Parliament, the Southern Independence Association, and the British Jackson Monumental Fund. The work also includes a chronology of events and a gazetteer of Confederate sites in London.

Appendix B. Pro-Confederate Publications and Their Publishers      164 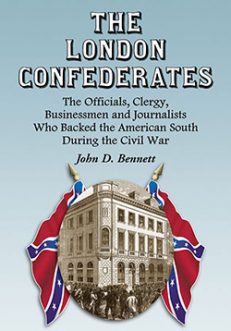 You're viewing: The London Confederates $35.00
Add to cart