The Limits of #MeToo in Hollywood

Gender and Power in the Entertainment Industry

In October 2017, actress Alyssa Milano sparked the #MeToo movement. The ensuing protests quickly encompassed far more than Harvey Weinstein and the entertainment industry. They expressed women’s outrage at male workplace behavior in every sector and social class and even helped elect a new generation of women leaders in 2018.

But what has been the effect of #MeToo in the entertainment industry itself? This book traces the movement’s influence on the stories being told, on changing representations of women’s lives and bodies, and on the slow changes among the producers who shape the stories.

Analyzing a wide set of TV and film genres—including crime, legal and medical dramas, comedies, horror and reality programming—this book covers the complex ways that media respond to social movements: They sometimes give voice to brand-new or previously silenced stories, but just as often make facile references that can blunt the potential for change, or even fuel cultural backlash.

Margaret Tally is a distinguished professor of social and public policy at the School for Graduate Studies of the State University of New York, Empire State College. She is the author or editor of several books on television and media, and several articles and book chapters in the area of gender and popular culture.

Acknowledgments vi
Preface 1
Introduction: The Hashtag That Launched a Movement 3
1. #MeToo and Its Impact on the Entertainment Industry 17
2. Hollywood Storytelling in the Wake of the #MeToo Era 36
3. The Backlash Against #MeToo and the Quest for Redemption 50
4. The Role of Comedy in Telling #MeToo Stories 69
5. Dramas and Documentaries in the Era of #MeToo 91
6. Anxiety, Terror and the Mundane: Horror Films and Reality Television 112
7. International Responses to #MeToo 132
Conclusion: Will #MeToo Ultimately Make a Difference? 151
Chapter Notes 173
Bibliography 179
Index 191

“Timely, well-researched…examines media discourse around #MeToo and explores how that movement has reverberated in the film and television industry…examines how #MeToo has shaped storytelling across comedy, drama, documentary, horror, and reality television genres and explores whether industrial changes behind the camera and at the executive level have occurred as a result. …highly recommended”—Choice 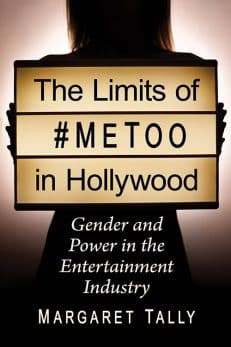 You're viewing: The Limits of #MeToo in Hollywood $39.95
Add to cart